Previous Next
Proposals unveiled for Love our High Streets 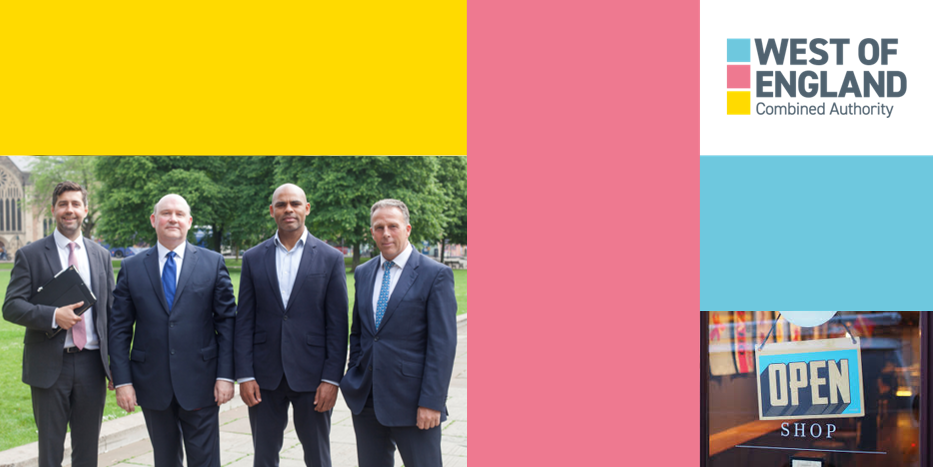 Proposals to give local high streets a boost through the proposed £10m Love our High Streets project will be discussed at the next meeting of the West of England Combined Authority (WECA) in Kingswood Civic Centre on Friday 30 November, at 10.30am.

The WECA Committee will discuss establishing a West of England Love our High Streets fund of up to £10m to support high streets across the region.

Bath & North East Somerset, Bristol and South Gloucestershire councils are proposing pilot projects in each of their areas – including Bath, Bedminster, Kingswood and Midsomer Norton.

Regional Mayor, Tim Bowles, said: “It’s been a tough time for our high streets as online shopping becomes increasingly popular. Through our proposed Love our High Streets project, we will work with our councils and communities to explore how we can secure funding, expertise and support to revive our town centres.

A single pilot with three locations is proposed. Each will explore new ways of making high streets fit for the future, including increasing footfall, attracting new uses and improving local facilities. The areas are:

This would support the development of currently underused or vacant spaces in East Street, Bedminster Parade, Cannon Street and part of North Street, with a focus on bringing new types of use into the area, strengthening and diversifying the current high street offer. Attracting businesses within the creative and digital sectors would be a priority.

This would look at how Kingswood High Street can be transformed for the long term, as well as providing some short-term investment. This would also include creating a makerspace studio which would offer digital training and equipment for the local community, and works on the Grade I listed Whitfield Tabernacle.

If approved, WECA would work closely with the authorities to agree detailed plans and outcomes. The pilot projects would lead to a longer-term Love our High Streets project.

The Combined Authority would also explore external funding, and support the councils to bid for a share of the Government’s Future High Streets Fund, as announced in the Budget.

A proposal for a Key Route Network (KRN) will be brought to the WECA Committee – setting out the routes that are critical for the region’s transport network and economy. Routes within the proposed KRN would be prioritised with the aim of improving journey times and reliability across different types of transport.

There will be an update on the West of England Bus Strategy, which will consider options to improve the performance of the bus network across the region and set out how further growth in bus usage can be encouraged, including specific proposals to create better, faster, more reliable and more accessible services.

An update on the Local Cycling and Walking Infrastructure Plan (LCWIP) will also be provided to the WECA Committee. The LCWIP is a proposed network plan for walking and cycling, identifying routes and zones for further improvement, enabling WECA to make a stronger case for funding.

The meeting will be filmed and available to view at www.westofengland-ca.gov.uk from Monday 3 December. Meeting papers can also be found on the website.

The WECA Overview & Scrutiny Committee will consider the above items at its meeting at 10.30am on Wednesday 28 November, at City Hall, Bristol.