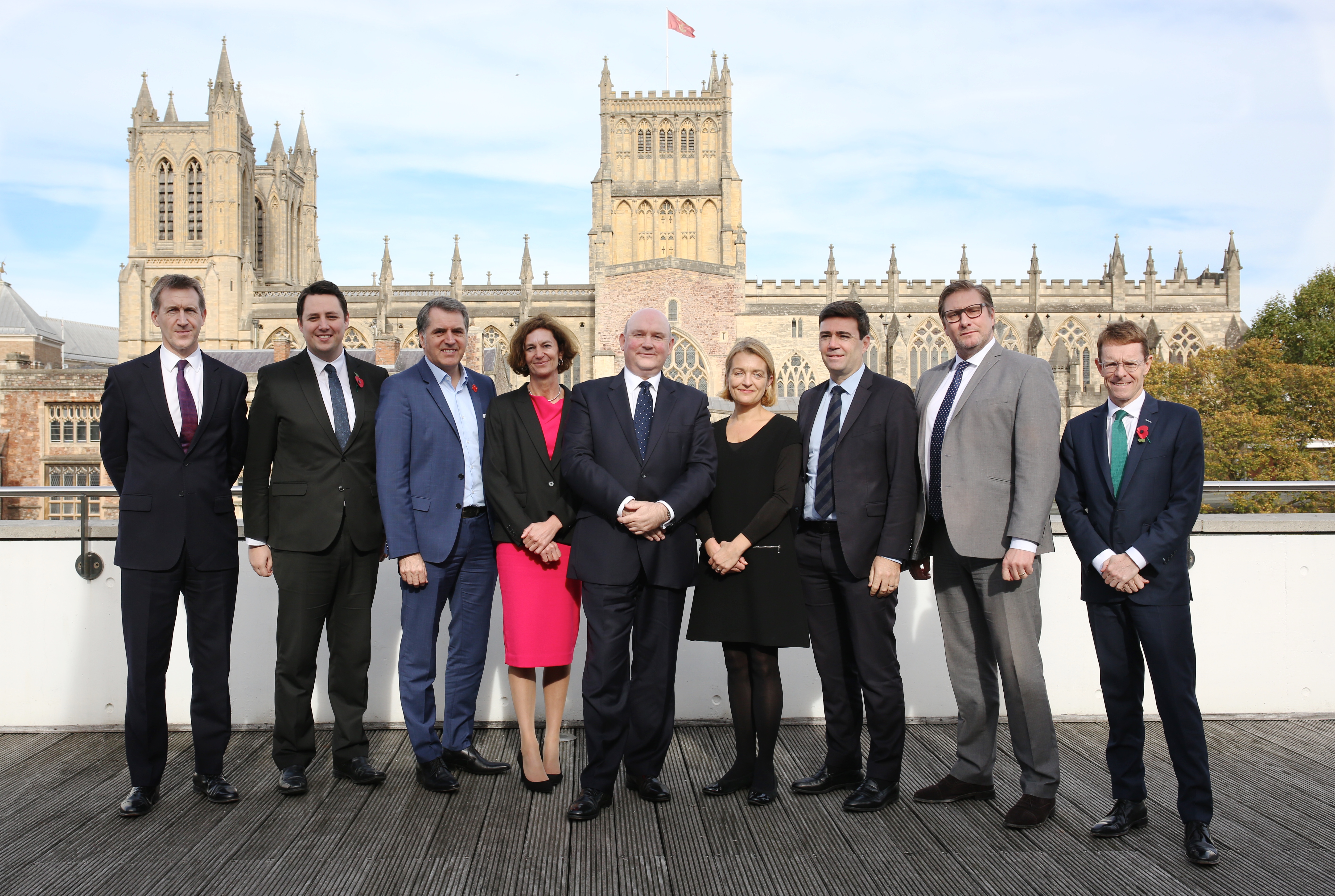 The directly-elected regional Mayors in England met in Bristol today, at the invitation of Tim Bowles, Metro Mayor of the West of England.

The Mayors are calling on the Government to strengthen devolution and fully-fund and devolve the Shared Prosperity Fund, which is being set up by the government following the United Kingdom’s exit from the European Union.

It follows the Government’s promise to introduce the new funding stream, which replaces the EU Structural Fund, Local Growth Fund and potentially other funding streams, and is worth at least £2.4 billion a year.

The Mayors call on the Government to ensure the fund isn’t held in Whitehall, but devolved to regional leaders to further boost devolution and empower Metro Mayors to ensure money is spent on priorities defined by local areas.

The call was discussed at the meeting today where the Metro Mayors also pushed the Government to remove unnecessary layers of bureaucracy, moving from decentralisation to full devolution to cut down on red tape.

All the Mayors present attended the Global Parliament of Mayors, currently taking place in Bristol and supported by the West of England Combined Authority.

Brexit makes it essential that directly-elected regional leaders take back control of funding from central government, ensuring devolution continues to both serve and empower communities.

Metro Mayors represent regions which account for nearly 42 per cent of all British growth (GVA) and the role of Mayors leading Combined Authorities provides an opportunity for government to utilise the expertise and leadership already available to grow local economies, embrace the opportunities and address the challenges facing regions.

The Government has announced plans to replace current EU cash with a Shared Prosperity Fund worth at least £2.4 billion pounds a year.

The cross-party group of Metro Mayors believe this fund should be devolved to regions rather than languish in Whitehall amidst red tape and bureaucracy.

The directly-elected regional leaders also call on the Government to move from decentralisation to full devolution as existing funding and reporting structures are fragmented, complex and resource-intensive.

The introduction of a streamlined and consistent approach is needed across government departments to fully embrace devolution and maximise the benefits across the country.

As the most powerful group of the directly-elected regional leaders, as a unified voice, we call on the Government to grasp these opportunities to re-focus on the devolution agenda and provide regions with the powers and funding needed to ensure economic growth and prosperity.

The Mayor of the West of England, Tim Bowles, said: “Metro Mayors are directly-elected by the regions they serve; we know our regions best and need additional funding, flexibility and tools to deliver for our communities. Brexit provides a real opportunity to take back control and re-think the way money flows from Whitehall to Combined Authorities. The benefits of devolution are being felt in the West of England and now is the time for government to move away from decentralisation in order to truly empower communities.”

The Mayor of Liverpool City Region, Steve Rotheram, said: “The seeds of Brexit were sown every bit as much in Westminster and Whitehall as they were in Strasbourg and Brussels. It’s vital therefore that the Shared Prosperity Fund is not held in Whitehall, but devolved to Metro Mayors so that we can drive investment to create good quality local jobs, help grow local businesses, and deliver prosperity for all of our residents.”

The Mayor of Cambridgeshire and Peterborough, James Palmer said: “The EU has invested significant funds in our area, particularly in the rural parts of north Cambridgeshire, but this money has not delivered the economic opportunities and social improvements that it should have. It is for that reason that I call on the Government to make any funding destined for Cambridgeshire and Peterborough through the Shared Prosperity Fund to be devolved directly to the Combined Authority, so we can use our local knowledge and accountability to make sure that money is spent where it is most needed and where it can directly benefit people. Cambridgeshire and Peterborough, and the East in general, has suffered from chronic underinvestment from Whitehall for many years. A devolved Shared Prosperity Fund presents an opportunity to not only help redress the situation, but also to target that money at our most pressing challenges, like upgrading our ageing transport infrastructure, building more homes, and tackling our skills shortages.”

The Mayor of Tees Valley, Ben Houchen, said: “We are still one of the most centralised countries in the world. Our Government takes responsibility for many things controlled by regional, state and city governments in many other nations. Brexit presents a real opportunity to empower local regions and local people, and we need to grasp it with both hands. For the people I represent, Brexit won’t feel like Brexit if we take power back from Brussels just to give it to almost equally remote politicians and civil servants in London. So what I don’t want to see is another Whitehall power grab when we leave next year. We therefore need to ensure that EU funding comes directly back to local Mayors so we can direct investment most effectively to meet the needs of local people and local businesses. Areas I represent have suffer from lower pay and stubborn unemployment rates, so while we need control over how these funds are spent, we also need to be front and centre of any new fund to support economic growth.”

The Mayor of Greater Manchester, Andy Burnham, said: “As we face up to an uncertain future, city-regions will need to act quickly and flexibly if we are to bring in the investment our regions need. An early commitment in the Budget to a devolved, fully-funded Shared Prosperity Fund is just the confidence boost our regions need right now and will help us deliver the Government’s policy of a truly local Industrial Strategy.”

The Mayor of Sheffield City Region, Dan Jarvis, said: “South Yorkshire’s economy is growing. We’re attracting investment from companies such as McLaren and Boeing, creating jobs and driving prosperity for all. Whilst this is good news for our region, the North-South divide remains. Decisive action must be taken – and taken now – to narrow the gap.  As Metro Mayors, we’re taking a stand. We’re working together to call on the Government to act on its promise to use the UKSPF to reduce inequalities, making post-Brexit Britain a place where all communities and regions can prosper – regardless of where they are on the map.”

The Mayor of the West Midlands, Andy Street, said: “In the West Midlands, between 2014 and 2020 we will receive £550m in EU structural funds. The Government has rightly committed to replacing this with the UK Prosperity Fund. However, I strongly believe that the West Midlands Combined Authority is the best mechanism to use to get the best value from this investment and am joining my Mayoral colleagues around the country in continuing to lobby for this.”